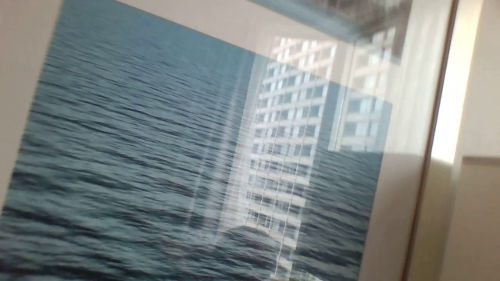 Last saturday we met at the Wavelengths Cocktail, and I was telling you
I had just done a film in my hotel room, before leaving it.

I had come from Paris without my movie camera, but I couldn’t leave this room
(moving in another hotel) without shooting the unexpected image I found there.

I used the camera of my small computer and it happened what I am sending you
now, by WeTransfer. I do not know if that 1 minute and 48 seconds can be taken
as a film, but for sure it has already a title :

Thank you and bravo! Its a beautiful and moving new Wavelength. Perhaps I’ll see you tonight.

I wish I would still be in Toronto for meeting you tonight,
but I am back in Paris since tuesday morning.

I spent four days in the festival, invited for my short film
called Under a changing sky.

I didn’t expect to see this photography in my hotel room
and I didn’t either expect to meet you. But it did happen,
and now it looks like if it was the main reason I had to
come to Toronto.